College of Resources and Environment

In the afternoon of October 15, the first round of the "2022 International College Football Friendly Match" kicked off in the football field of the Yanqi Lake East Campus. Nearly 30 players from the International College (IC) and the College of Resources and Environment participated in the game, which consisted of three sessions of 30 minutes each.

At 1:30 pm, players from both sides, led by the referees, entered into the field at a brisk pace and in full spirit. They high-fived each other and greeted the referees and the crowd. Then, all of them entered the pitch and stood waiting for the game to start.

At the whistle, the IC team kicked off first, and players from both teams quickly got into the swing of things. IC players kept attacking actively and had a number of threatening shots on goal within the first ten minutes. As both sides got to know each other better, the game became increasingly intense. Halfway through the first session, IC players cooperated perfectly and attacked decisively, scoring the first goal of the game. Our players then worked harder and continued to carry out a number of powerful attacks. Finally, at the end of the first session, IC took a temporary lead with a score of 1:0.

After a short break, the second session kicked off, whose tempo was significantly faster than the first one, with both teams attacking more often and defending more strongly. IC players kept their high spirits and continued to attack, bringing the ball near the opponent's goal several times and putting great pressure on them. On one occasion when the ball was served, an IC player seized the right opportunity to shoot the ball into the goal just as it entered the field. This wonderful goal won a cheer from the crowd and made our players even more dynamic, taking the initiative on the field throughout the game.

In the last session of the match, IC players continued to perform brilliantly and wined applause and cheers with their accurate passing, excellent crossing and outstanding defending. With tacit cooperation, IC scored again, further extending the score and keeping it until the end of the game. Finally, IC won the friendly match with a score of 3:0. 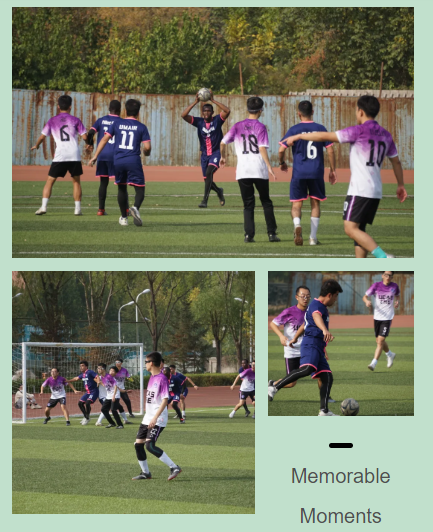 At the end of the match, referees and players from the College of Resources and Environment congratulated IC players, who also expressed their gratitude.

During the friendly match, IC players showed good spirit, who adhered to the principle of "friendship first, competition second". They were dynamic, tactical and united on the court. Their performances were highly recognized by the opponents and the referees.